Well, I played the game, and now I’ve seen the film. 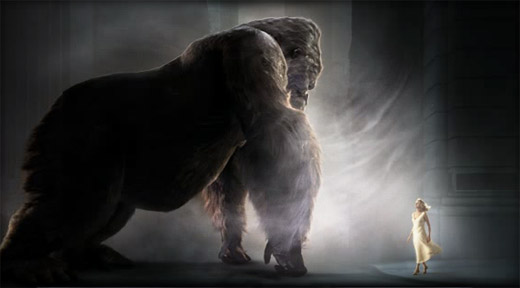 I must admit when I found out Peter Jackson was following up the Lord of the Rings movies with King Kong I was more than a little disappointed. I’ve always thought of the original film as rather daft so have never watched it and I felt this would be more of the same. When I heard Andy Serkis, fresh from Gollum, was going to be playing another cg character I was even more surprised. How was a normal bloke going to play a 25 foot gorilla? I was all ready for him to say he would follow up King Kong with something like Godzilla, naturally Andy would be the cg monster… again.

However the closer the film got to release the more interesting it became. The trailer actually looked good, and finding out Michel Ancel was producing the video game made me think Peter Jackson may have had his head screwed on right after all.

Everyone knows the basic story, whether you’ve seen the film any of the films (I didn’t realise King Kong had been remade before) or not, so I figured it wouldn’t matter that I played the game before the seeing the film, and I was right. King Kong, the movie, is very different to King Kong, the game.

I don’t have much to say beyond, ‘I really enjoyed it’.

There were a few bits that were, erm, daft. The end of the chase scene (if you can call it that) really reminded me of the Blues Brothers chase scene involving about 500 police cars. I can’t say much more in case I spoil it for the three of you who have yet to see the film but I did have to laugh at the ridiculousness of it.

I felt the section with the bugs and creepy crawlies was rather out of place as well, it had a very different feeling to the rest of the movie, and could quite easily have been left out. It did have the best death in the film though – the way Andy Serkis character, Lumpy, dies is both incredibly cool and absolutely disgusting. Oh, and you read that right. Andy has a human character in the film, the ships chef, as well as the lead role of Kong.

Despite popular opinion there are other actors besides Mr Serkis in this film. Jack Black is relatively subdued as Carl Denham, Naomi Watts is wonderful as Ann Darrow, and Adrien Brody is surprisingly athletic as Jack Driscoll. I was rather surprised by the cast. They all played, at least a little, against type; with Jack Black in particular showing he can do something more serious when he tries.

The ending with Kong on top of the Empire State building is stunning, and the amount of emotion in Kong amazing. I’m a convert – and now I’ll have to watch the classic version to see how it compares.