The company is run by a rather eccentric Englishman called Daniel James (see a photo of him here… he likes to wear this stuff). At work we run both Puzzle Pirates and Bang Howdy on Miniclip, and I had the pleasure of meeting Daniel a couple of years ago when Puzzle Pirates was still fairly young.

Based on what I had heard about Three Rings there are lots of things I like about their working environment. Like Miniclip they are quite relaxed, and don’t do over time/ crunch time in the way that larger companies do. They are also well known for their parties. However today Wired posted a bunch of photos of their office, and it looks like something out of a movie. 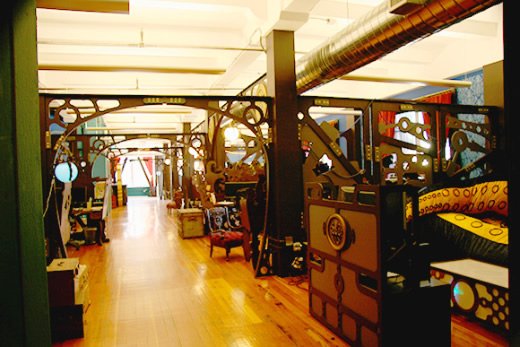 Looking at the photo above you should just about be able to make out the Ocotopus/ Tentacle based relaxation area, and the treasure chests (that hide tv’s and games consoles). There’s a whole stack of photos over at Wired and they show off all the other cool stuff at the Three Rings Office.

A short history of Miniclip.com