Coraline is a stop motion animated movie directed by the same Director as The Nightmare Before Christmas, which meant I instantly assumed that the Director was Tim Burton, and after watching the movie my opinion hadn’t changed. Coraline is a very atmospheric, dark film, and it wouldn’t have surprised me at all if Tim Burton had directed it – but it turns out he hasn’t.

The Director of Coraline is a man called Henry Selick, and the story was written by Neil Gaiman (who also wrote the awesome Stardust), and between them they have managed to create something wonderfully frightful. 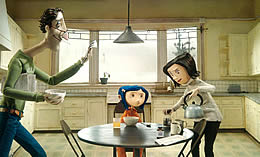 Coraline tells the story of a young girl with an unusual name. Her parents aren’t very attentive (they’re too busy writing a gardening book) so she has to entertain herself, and when she finds a tiny door in their new house, things start to get a little bit strange.

Somehow Coraline manages to go through the door, which was bricked over when she first found it, and ends up in a parallel world where her ‘other mother’ and ‘other father’ are more than willing to do all they can to make her happy… at a price. 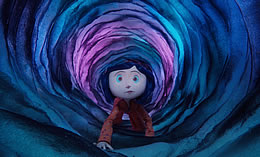 The animation in Coraline is incredibly smooth, and in some places I had trouble working out whether it was stop motion or Computer Generated (I wonder if this is because of watching it on the tiny iPod Touch screen). There were clearly some parts that were stop motion, and a couple of shots I thought were filmed live, and then there were CG elements layered on top, but they’ve all been blended together wonderfully.

As I mentioned above the story is quite dark – in some places sinister even. I could see small children being quite disturbed by it, equally I can see slightly older children revelling in the vibrant animated world. The other mother is distinctly creepy, which is strange considering how nice she is, there’s just ‘something’ not quite right with her. 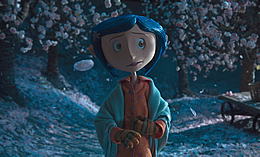 The character Coraline is grounded firmly in reality. Ignoring the fact she’s a puppet she’s identifiable – the things she goes through in the ‘Real world’ are the same things that tens of thousands of teenage girls go through every day. Adding this real world feel to a fantasy movie makes it all much more believable and allows you to connect with the characters more easily.

If you missed Coraline at the cinema then I would definitely recommend watching it on iTunes or DVD – just watch out for those buttons!