A couple of years ago Sumo sent me a Sumo Omni bean bag to review. It was fantastic for relaxing on, in particular for sitting around and playing video games or watching movies. But now its time for something new. The Sumo Gamer. 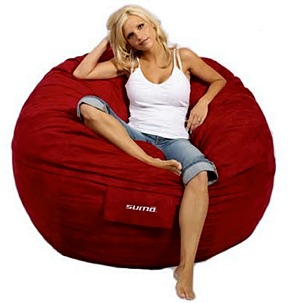 On paper the Gamer is smaller than the Omni. Width and depth are less, but the height (and so the volume) more than make up for this… in fact my brand new Gamer dominates my living room.

Initially there was some concern. After unwrapping and setting up the Gamer there was an awful lot of static on the cover. The spark I created after the first time I sat on it was actually visible – and bloody hurt.

Thankfully the cover is machine washable so a quick spin through the washer and it became lovely and static free. I suspect it happened because of being packed in a plastic bag for shipping, hopefully it won’t happen again. In the USA there is a corduroy option which sounds like it won’t have this problem at all – I might ask if they will let me import one as they sound fun anyway 🙂

Rather than traditional polystyrene beans the Sumo Gamer uses some sort of shredded foam filling which makes it a lot more comfortable and means it will keep its shape and size indefinitely.

Despite the initial setback the Sumo Gamer is already getting more use than the Omni. If you have a small house or flat then you may want to get something different but if you want a decent sized, comfortable, bean bag chair that will last – then the Sumo Gamer is the one for you.