Went to the cinema the other day to see Mission Impossible 3. 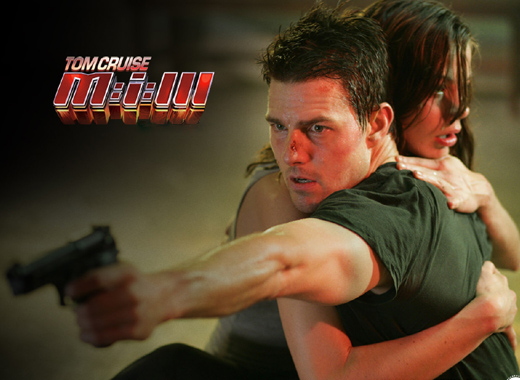 Unfortunately I can’t decide whether I liked it or not. There was lots of action, some of it quite cool, and it was a lot more emotional than previous films (or at least it tried to be). There appeared to be an attempt to make the movie more like the tv series 24 with smaller set pieces where anything can, and will, happen.

The movie starts with Ethan Hunts girlfriend being killed – then steps back a few weeks to their engagement party. Ethan is now a retired operative who is training new recruits when he gets called in for “one last job”. Then follows the standard “mission goes wrong thing” that pulls him in even further.

Each Mission Impossible movie has been directed by someone different, and has tried something different with the story. Personally I don’t think this one felt like the other two films. They had a style that held them together, along with missions that could conceivably be impossible. In this film there wasn’t a huge sense of danger in anything, especially since you know Ethan survives at least a little bit longer, simply because you have seen him in a few weeks time.

Tom Cruise looks the part but there are a number of places where his age seems to be catching up with him. That said he does know how to run – but it’s not something I had noticed before. The action is quite nice – fast paced and lots of it. I wasn’t keen on the shaky cam that was made popular in the Bourne Identity and seems to be used more and more in films that want to have a “real life” approach.

It was worth seeing especially if, like me, you get to see it for free. I would probably suggest to people that they wait for the dvd to come out and just watch it one weekend.