I went to see the new British comedy, Hot Fuzz, the other day – and it was absolutely great. 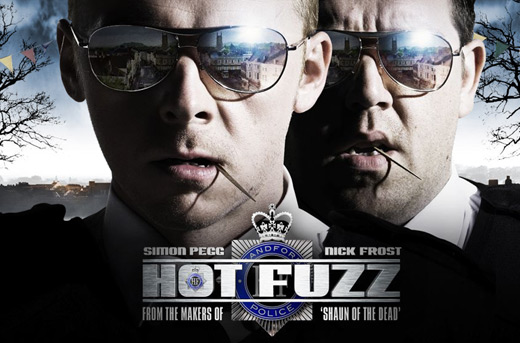 I haven’t seen Shaun of the Dead, despite hearing that it’s really rather good, but that didn’t stop me from wanting to see this film. From what I have heard the humor and the style of the two films are fairly similar and having now seen Hot Fuzz I think I will give it a go.

I was very surprised by the levels of blood and gore in the film but it was all suitably b movie style with plenty of comic over the topness that stops you from taking it all too seriously – and to cut this post incredibly short I loved it!

Simon Pegg isn’t the sort of actor you would normally associate with an action hero role but he plays his role, as Sergeant Nicholas Angel (Angle?), surprisingly well. Despite being English myself I have never really watched the Spaced tv series (from pretty much the same people who made this and Shaun of the Dead) but I am now more interested in taking a look.

The movie is incredibly fast paced, and shares a lot of similarities with American action movies… only things have been twisted around to give it a very (very very) English flavour.

The shoot out at the end is wonderfully insane and made me laugh far too much, there are stacks of British comedians throughout, loads of in-jokes, and a generally very enjoyable story. I would recommend this movie to anyone.