Over the last couple of months I have been using an iPod Touch. It all started because a game developer contacted me asking if I would be interested in reviewing his iPod Touch/ iPhone games on Binary Joy.

At the time I didn’t have an iPod Touch but a friend did so we got to talking about it and it turned out he had an old Touch he no longer used (having got an iPhone) – so here I am with a first gen iPod touch – reviewing iPod video games. 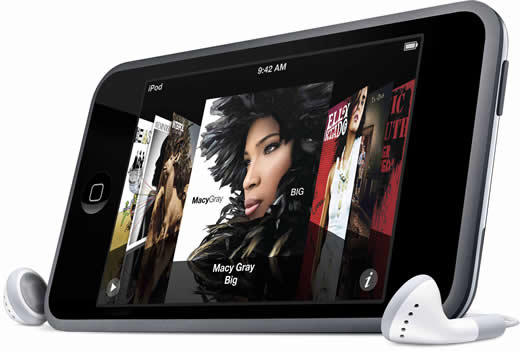 As I mentioned above the main reason for me borrowing it was to play games. I’ve heard it touted that the iPod Touch and iPhone are DS (or PSP) killers; and I can honestly tell you the people who say that are deluded.

The iPod Touch isn’t up to scratch as a gaming device. Now don’t get me wrong – there is the possibility for some good gaming on there but we’re talking colour matchers and other casual fare at best – all of the other, more hardcore, games I’ve played have had to be dumbed down for the platform.

The biggest problem is the total lack of controls – in particular a control system with tactile feedback.

The touch screen doesn’t work – any buttons added reduce the size of the gameplay area. The gyroscope offers some possibilities if used intelligently but more often than not the controls are implemented in such a way that you will find yourself tilting the screen so that you can’t see it properly (Time Crisis Strike is particularly bad at this).

As time goes on there are more games coming out that use the device in creative, enjoyable, ways – but very few of the games have anything near the depth of the majority of the games on the DS.

To be honest I don’t see any of this changing. The iPhone is designed as a phone first (clue – it’s in the name) – with a stack of multimedia features added. As a phone/ mp3 player/ portable web browser it works very nicely. The keyboard does get easier with practice, although the speed and accuracy will never match that of a physical one.