Being under 30, English, and disinterested in both politics and history I wasn’t sure what to make of Frost/ Nixon. It’s a movie about a US president, Richard Nixon, who disgraced because of something called the Watergate scandal (yes, I’ve heard of THAT) retired, and was later interviewed by a relatively unknown English man called David Frost. 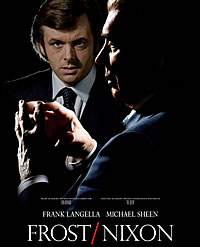 The only David Frost I know of is a nosey bloke who hosts a light weight lunch time game show involving rummaging through celebrities houses. It’s a bit like a game show version of Cribs where you have to guess who lives in the house. And sometimes he does interviews too.

Turns out his first claim to fame was when he interviewed president Nixon shortly after he stepped down from office, and the story makes for fascinating watching.

Having not heard of this interview (my girlfriend tells me it’s really famous) I could only guess what would happen, and if I’m honest, my guess was right (they wouldn’t have made a film about it otherwise), but it was a wonderful interpretation of events.

As soon as I finished watching the film I found as much as I could of the original on YouTube and found that the movie version was really similar to the real interview. Eerily so.

Both actors played their parts amazing well. Michael Sheen, who seems to have a knack for realistic impersonations, having played Blair, Brian Clough, and Kenneth Williams, was great as David; I recognised the accent immediately. Likewise Frank Langella was wonderful as Nixon, in particular the emotions at the end which showed a man floored by a realisation – someone genuinely sorry for his actions.

No doubt it helps that both actors were reprising the parts they played in a stage version of the same story, and that can only have made things more natural.

I went into Frost/Nixon not knowing what to expect and not really expecting much, but I was really pleasantly surprised. It was a fascinating look at an area of history that I know little about.

Like Duplicity, Frost/ Nixon looked great on the iPod Touch. I did have some problems with the sound but that seems to have been my new earphones, and the fact that I was watching it on a noisy old train.

Duplicity and Frost/ Nixon combined have sold me on the idea of watching movies or shows on the go and I suspect I will be buying some iTunes movies of my own in the future – especially the action films Jo dislikes so much ;). You can get Frost/ Nixon from iTunes here.