As I mentioned on Twitter recently I have been sent an iPod Touch loaded with some movies to review. The films are by NBC Universal and the iPod is etched with their logo making a very cool gift to mark their entry into the iTunes store.

It’s rather nice being able to watch films again, I used to watch loads but recently just haven’t had the time. Now that I have an iPod Touch of my own I can watch them on the train on the way to work. It’s not an ideal cinema experience but is considerably better than I had before – and it makes the journeys SO much more interesting.

The first I wanted to review was Duplicity. This is a film all about industrial espionage in the beauty trade. It doesn’t sound like the most exciting premise but somehow it manages to keep you guessing all the way through. 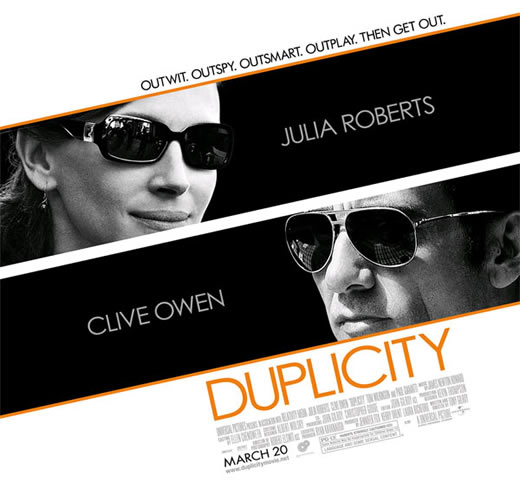 Ever since the Final Suspects I have been on the lookout for twist endings, and often (but not always) can guess what will happen by about halfway through. That didn’t happen here – in fact there are loads of twists and altering perspectives during the film but I was able to follow the story quite easily, despite watching it across multiple train journeys, and I only worked out the ending about 5 minutes before it happened.

The stars of the piece are Julia Roberts and Clive Owen. I must admit I have never understood the appeal of Julia Roberts (but then Pretty Woman bored me) and in this I found her to be a little wooden. However I like Clive Owens work, especially in the Bourne Identity and Sin City, and stand by the fact he’d have made a good Bond, so it was good that he was here to contrast with Roberts.

Despite the nature of the film (it’s a spy flick), and despite Clive Owens involvement – there is actually pretty much no violence or adrenaline pumping action, yet it manages to pound along at a rapid pace – never slowing or giving you a chance to think.

Quality wise Duplicity looked great on the iPods tiny screen. It would have been nice if there was a 16:9 ratio version to remove the borders as the screens are quite small without them, but you sit so close to the screen it still fills much of your vision. There are a few interstitial scenes that feature small moving panels that are a little hard to make out, but the iPod Touches zoom function (double tap the screen) can help if things get too bad – it’s just a shame you can’t pan to see what’s happening at the edges.

Overall I think that Duplicity was a nice change of pace for me and an enjoyable way to spend a train journey. I would certainly consider buying more films from iTunes in the future.

Next on the list is Frost/Nixon, which is a very different film altogether.

4 thoughts on “Duplicity : an iTunes movie review” Leave a comment ›