I went to see Sin City yesterday. I’ve never been a fan of comic books or graphic novels but this looked really nice, and being a sucker for anything that tries to be different, had to give it a try. 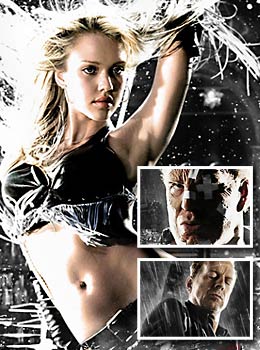 The film is styled very closely to it’s source, pretty much everything is in black and white (mainly black) with the very occasional splash of vibrant colour. Apart from the actors and a few props pretty much everything in the film was made inside a computer and it turned out very nicely indeed. Robert Rodriguez, the director, has said that the film was a ‘translation rather than an adaptation’ of the original graphic novels by Frank Miller. The film was storyboarded using panels from the books and a number of the scenes match the comic almost identically.

I had heard the film was incredibly bloody and being a bit squeamish was a little concerned, and with good reason as it turned out. There was lots and lots of death and destruction however, like Kill Bill, the violence was ridiculously over the top and it was hard to take anything too seriously.

Sin City was made up of 3 main stories with the lead characters from each story appearing in different places throughout the entire movie. Each of the stories involves an unlikely hero with criminals/ dying cops doing what they have to do in order to save the day. A lot of story and characters were squeezed into the two hour running time, and the pace hardly slows down at all making a very intense film.

I thought the acting was really good, and fit the style of the film perfectly. As a number of reviews mentioned (pretty much all of them actually) Mickey Rourke was very well cast and fit the character perfectly. In fact I’m finding the whole film hard to fault – It was an incredibly visceral, unique, disgusting experience and I’m looking forward to see what the sequels will have to offer.

Guess I’m going to have to read the comic books now!