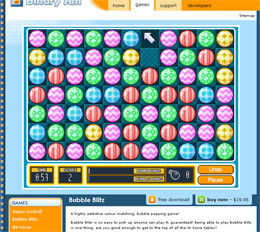 Something I have wanted to do with Binary Sun for a while now is get some online games. The obvious solution would be to add some games made in Flash, but I don’t like to do things the easy way.

So Bubble Blitz, a downloadable Exe game, is now playable in a browser – assuming of course you use Windows (a Mac version would be lovely though – I’m looking into sorting that out).

To get the game into a browser I am using a system developed by Tim over at Indiepath. It’s called igLoader, and will let you play an exe based game in any major Windows browser (Internet Explorer, Firefox, and Opera).

The idea behind using a system like this is to remove confusion for games players. The online game is essentially the same as the downloadable demo and, after installation of the plugin, any game using igLoader can be played online – not just the games from my site.

Obviously there are problems with a system like this. It’s a new plugin so people will be more wary of installing it, and the take up will be considerably slower than Flash, at least until a bigger company comes along and starts using it. There are concerns about privacy and security. There are technical hitches as issues are worked on and the plugin developed. But all in all it’s coming along nicely.

The easy solution for the people who are wary of downloading new tools like this is to offer a downloadable demo as well, in fact I’d encourage it. It’s cool that you can play the game online but not everyone wants to do this so I think it’s always a good idea to do it anyway.

Privacy and Security are things that have been anticipated by the developer. To combat potential issues products require a license key to run, start doing bad things and the license will be revoked (the plugin checks license key validity on a centralized server).

Technical hitches, they’re to be expected, and at the time of writing, there have been no new releases for a week or so. I think the plugin is at a stable state where it can start to get more widespread use – which is why I’m writing about it now.

Anyway – you lot don’t care about any of that, you just want to play free games right?

You can try Bubble Blitz online at my website, and you can try out a few different games at Cloverleafgames, another of Tims many projects.