Shortly before we went to see Damien Rice my girlfriend bought tickets for us to go and see Athlete at the Norwich UEA LCR (University of East Anglia LCR… don’t know what the last bit means). Last night it was finally time to go see them, and we had a great time.

It was actually part of the UK tour for their new album, Beyond the Neighbourhood and naturally I hadn’t listened to it, so I spent the whole day with it playing on a loop. Jo got home from work at 6 and we had a crazy rush to eat and get dressed so we could get there in time for the doors opening… and it’s a good job we did. The venue was, what some would call cosy. Thankfully getting there early meant we were able to get a pretty decent view. 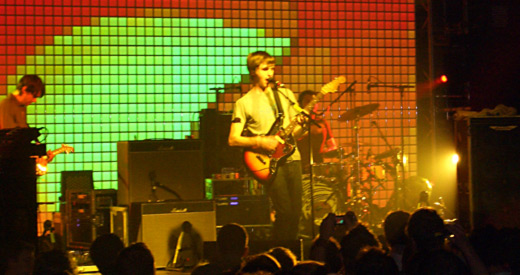 Very soon after we got there the first act started. First impressions weren’t good – and neither were the second or third impressions – it didn’t get better. The lead singer was the only person who seemed even remotely interested, the lady on the keyboard (and xylophone) looked like she didn’t want to be there, and the rest seemed bored.

I looked them up on MySpace (I had to Google their name – The Robot Heart) and it looks like this lack of enthusiasm may be part of the act however, unlike the White Stripes where the attitude and music work, this just fell flat.

Thankfully they finished fairly quickly… and we found out that they weren’t the main support act. Loney, Dear came on pretty soon after and I really enjoyed them. They were much more enthusiastic, if a little quirky, and I am intending to buy some of their music soon. Apparently Loney, Dear – from Sweden – is actually the pseudonym of the lead singer, Emil SvanÃ¤ngen, he makes all his albums (4 of them) on his own and has a bunch of friends who help when playing live.

Two thumbs up for Loney Dear, they set us up nicely for the main act…

I don’t have the latest Athlete album (the one I listened to before hand was Jo’s) but have a couple of the older ones which I know quite well. Despite the tour being for the new album they played quite a few of their classic songs so I was able to sing along to a handful of tracks… unlike at the Ben’s Brother gig last month. 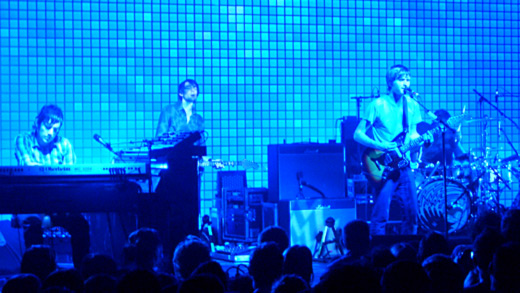 The volume was turned up nice and loud and the lighting effects were really impressive – halfway through the show the curtains at the back of the stage were dropped to reveal a massive light wall… very cool. The group were by far the most enthusiastic of the three and their immense energy more than made up for the lacklustre start.

I know it’s a cliche but music really is better when it’s live. The atmosphere and the sound combine to make things much more intense – I am now a proper fan of Athlete where before I was simply someone who had thought they were “ok”- I ended up really enjoying the evening.

Now what should we go and see next..?

2 thoughts on “Athlete at Norwich LCR” Leave a comment ›