Went to see Run, Fat boy, Run at the cinema the other day. It was really good.

I’ve become a bit of a fan of Simon Pegg, Hot Fuzz being one of the big reasons why. Somehow he has made being a geek quite cool, and that can only be a good thing. However if you go into Run Fatboy Run expecting something like Hot Fuzz or Shaun of the Dead then you are likely to be rather disappointed. 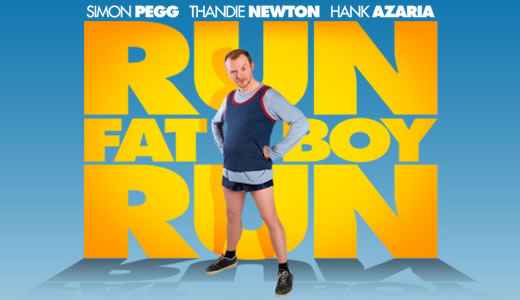 Run, Fat boy, Run is a much straighter comedy than either of those, the jokes are more traditional and the story is almost normal, realistic even. That said there are still some classic Simon Pegg moments (the blister) and a handful of cameos from English comedians (“Can you give me something in the shape of a fish?”).

The story is reasonably generic, a man loves a lady but can’t commit – ditching her hours before their wedding. He realises he’s wrong and then she meets someone else. He has to win her back… by running a marathon. You may think I’ve spoilt it for you but we’ve all seen this sort of film before. The importance isn’t in the story outline but in the journey the characters travel – and it’s that which I enjoyed the most.

Simon Pegg plays someone who is a bit of a lazy git, and doesn’t like to put himself out. However he loves his nearly wife (played by Thandie Newton) and his son. Hank Azaria (of Simpsons fame) plays the new love interest, and very good he is too.

Run, Fat Boy, Run is a nice light movie. Something you can just watch and enjoy, without having to think, and I enjoyed it an awful lot – there were some genuinely laugh out loud moment (back to the previously mentioned blister again).