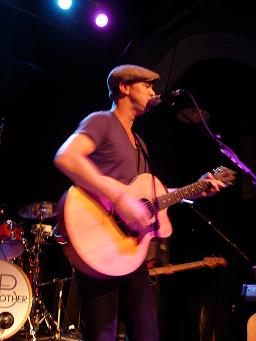 I’ve been rather busy with another project recently (more on that soon) so I didn’t get a chance to post this in a timely manner. What happened is a couple of weeks ago I went to see Ben’s Brother at the Norwich Arts Centre. It was actually the groups last gig from their first headlining tour.

They’re a relatively new group – although that’s not entirely fair as they’ve been around for a while – it’s just that they have only recently gotten their big break. The front man – the titular Ben’s Brother (who’s actually called Jamie) – has written and performed for years, including penning songs for Will Young, and Natalie Imbruglia.

The first I had heard of this group was when my girlfriend emailed me to tell me she’d just bought tickets for us to see them – so I headed over to iTunes to have a listen – really enjoyed what I heard.

From an interview with the Independent.

[Jamie] Hartman is a 33-year-old who is Ben’s Brother, his band-name a wry, deferential nod to the fact that he spent so much of his life living in the shadow of Ben, his older sibling. During their teenage years, Ben was first the shining student, then the prodigious sportsman who might just go on to become a professional cricketer. Ultimately, he turned to advertising, where he now earns a healthy crust as a copywriter in one of London’s bigger advertising firms.

Norwich Arts Centre is pretty small (max 300 people) and we ended up standing right at the front which was a little embarrassing since neither of us knew all the words… and I don’t (can’t) dance, yet everyone around us were clearly big fans as they were singing and dancing along to everything. To tell the truth this didn’t really matter as we were enjoying ourselves so didn’t care too much at all.

The music was surprisingly powerful. The electric guitar seemed to be played by someone not in the bands official roster (at least I don’t see him on their site), and gave things a much more rocking feeling – something which is missing from the album. I hope they do more of this sort of thing as I thought it worked really well.

Speaking of the album we now have two copies. Jo, my girlfriend, bought the album with the intention of getting it signed… then left it at the flat so I ended up buying another one at the gig itself (which is now signed).

A mention should also go to the support act, Alice McLaughlin. It actually took me ages to find her website as the people at the venue had called her Alison which confused me. I managed to spell her surname correctly but was searching for the wrong christian name. Anyway she was pretty good too – and reminded me a little of my friend Georgiana, whos site I have run for the last couple of years.

In a couple of weeks we’re going to see Athlete at a larger venue. Should be fun… although I won’t be standing at the front for this one.