A year ago – almost to the day – Darren and I released Mimbo Pro, a premium WordPress theme. Since then both WordPress, and our technical skills, have grown considerably and so we’re now ready to present to you, Mimbo Pro 2.0.

Superficially Mimbo Pro 2.0 looks quite similar to it’s older sibling, but it’s actually ended up being almost a complete rewrite. The code is considerably cleaner and simpler now, and there is more abstraction which means removing much of the PHP from the templates – which in turn means easier updates.

Besides cleaner code there are a whole host of other changes and improvements. 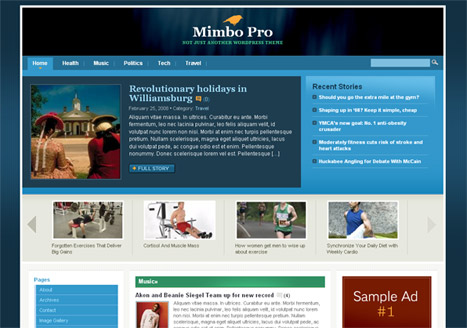 Since the original Mimbo Pro release there has been much speculation and discussion around WordPress themes and licensing. When we released the theme we imposed our own license restricting the themes usage. Whilst this made sense to us at the time on reflection it is too restictive and goes against the open nature of the software on which it is based.

As WordPress developers the software on which it is founded is very important to us, so we made the decision to change our licensing model. Now, rather than selling the theme for use on a single site (or multiple sites) we will be selling support for the theme.

Downloading and receiving updates for Mimbo Pro has always been awkward. Traditionally if someone wanted to update the theme then they would contact Darren or myself and we’d supply them with a download. Thankfully, for both our customers and ourselves, this is now over. Over the last month or two I have developed an accounts control panel (using the wonderful CodeIgniter framework) to allow people to download the theme and associated files quickly, easily, and at any time. Some would say this is an obvious thing to do, but I can be a little slow sometimes.

TimThumb is our image thumbnail script. I have been meaning to write about it for some time and have been developing it for even longer. The current version has undergone many changes since version 1 – and it’s a lot more robust because of it.

New features are mostly functional (ie behind the scenes). For example the caching has been improved, and the cache folder now get’s pruned automagically. Also there is much better support for Windows servers.

Another TimThumb related improvement is that thumbnails are now pulled directly from the post content – so there is now no more custom fields required. It’s all about ease of use.

Security is important to everyone, and as such I spent a day working out how to add a Captcha script to the built in contact form. It’s a small measure but every little helps.

The things I have listed above are a small selection of the changes the theme has gone through – and the ones I personally have learnt the most from. If you want to see a comprehensive list then you can read Darrens release post over on Pro Theme Design.

If you like the look of Mimbo Pro 2.0 and are in the market for a new theme, then you could do a lot worse than checking out the Mimbo Pro demo, and maybe even buying it.

So this ticks off one item from my todo list. Next up is my own Premium theme, which I have titled Majestic – and after that it’s time for me to finish off some free themes… and work on the Binary Moon redesign… and…