WordPress is now 10 years old. I started using wordpress 9 years ago – which means I joined the WordPress community early on. The reason I chose WordPress is simply because of the fabled 5 minute install process – I was installing various competing platforms on my local machine and WordPress was the only one I could get running without having to setup other things.

In the last 9 years of using WordPress I have been involved with a number of projects that have taught me a lot about the software and helped to improve my development skills.

And so today is WordPress 10th birthday. Happy Birthday WordPress! 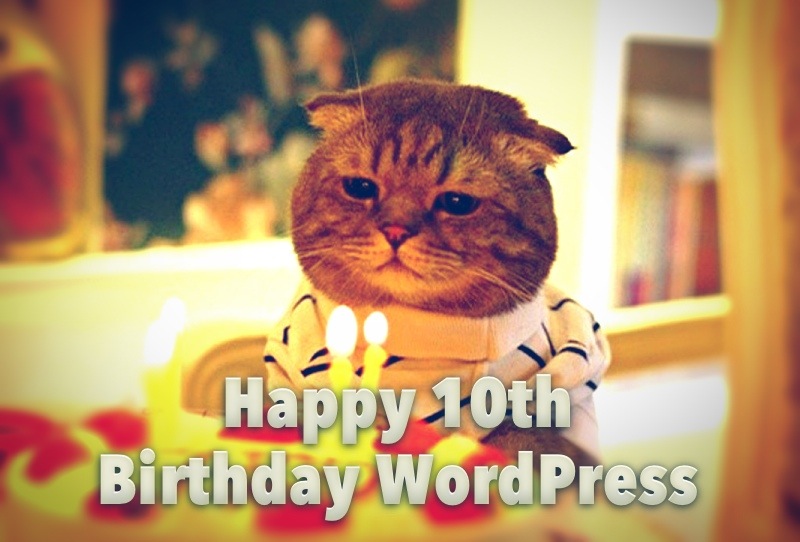 Some of the highlights (and lowlights) of my time with WordPress have been:

I touched on this a bit the other day when I was redesigning the WordPress post editor – but I have some thoughts about how WordPress is going to evolve. I think that WordPress already has all the core features it needs to do everything you could wish for – arguably you can make any type of website you want – so how can it be improved?

I see the future development of WordPress focusing on two areas.

Everyone knows that there’s a lot of code in WordPress – and that some of it isn’t optimal (in particular the original code). I imagine the entire WordPress team would like to spend some time improving it – whether that’s rewriting the admin interface in JavaScript, or improving legacy elements. Because of their dedication to backwards compatibility this is a hard job – but I’m sure it’s an area that will get some attention.

With the development of WordPress 3.6 the focus was less about new features and more about trying to improve WordPress usability. There’s a lot of power in WordPress and much of it is underused so how do we encourage people to use these different functions? Over time lots of features have been added to WordPress and I think making them easy to use is long overdue. Whilst the software is relatively simple it still has a reasonable learning curve for less technical users.

As well as changing focus in terms of what should be developed – I think the WordPress team should change focus in how the software is developed. If it were up to me I would change a few different things.

To guide the development and decision-making process that dictates the future of WordPress the team have two incredibly powerful tools available.

Firstly – they have WordPress.com – and the sites massive audience of users and active sites. The majority of the users on the service use it for free, but their usage of the platform means that there is a an awful lot of data to teach the developers how users interact with the software. For instance – WordPress 3.6 sees an improved WordPress custom menu system. To make the design process easier the team looked at the way people use custom menus on WordPress.com, for example – how many items users have in each menu, and the average number of menus per theme. They then used this data to guide their design of the new menu editor.

Secondly – there’s WordPress.org. I would suggest using this in a similar way to WordPress.com. Analysing statistics from the plugin and theme repositories would enable the developer to determine what people most want to do with the WordPress platform. From this they can get an insight into the exact areas that need to be developed further.

I’m not far from my own 10th birthday of using WordPress – and I have lots planned. I will continue producing themes, I have 2 themes that will be ready for WordPress.com soon, and I have recently had a few ideas for brand new products. Plus I have a site I’ve started developing in WordPress that will be awesome! I just need to make sure my technical skills are up to scratch 🙂

So how about you? Are you still liking WordPress? What are your highlights from the last 10 years? Where do you think it’s heading? Let me know in the comments.

2 thoughts on “WordPress: 10 Years Young, What Does The Future Hold?” Leave a comment ›