I think Joss Whedon is fantastic. Buffy, Firefly, and even Dr Horribles Sing Along Blog are all a lot of fun. Firefly in particular showed loads of potential so I was disappointed that it never even got to the end of its first season.

Because of this I decided to get in on Dollhouse early. If enough people sing it’s praises then maybe it will get an additional season or three.

Dollhouse is actually really different to Joss’s earlier shows. The tone is overall more serious and , whilst there are ‘comedy’ characters (like Tofer) it generally has a darker more adult feel.

The story is also very unique. The series is based around an agency called Dollhouse. They have agents for hire who are actually people who’s brains can be reprogrammed so that they, unknowingly, take on new personalities. The actives can be male or female and they can be hired to do almost anything from being a loving partner to a hostage negotiator or world class thief (all those and more in season 1!). 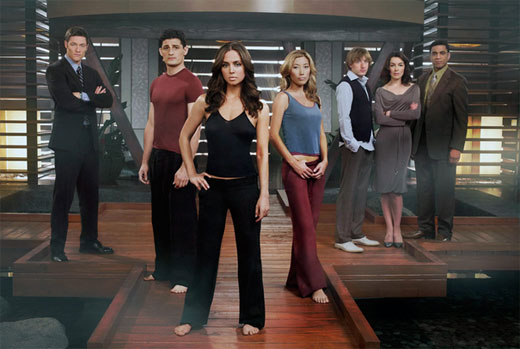 If that wasn’t interesting enough there are a variety of other themes running through the series. Themes of rebirth, and personal freedoms. In particular these stories revolve around Echo, the series lead. Echo is played by Eliza Dushku, the gravel voiced second slayer, Faith, from Joss’s Buffy series. Each episode she plays a slightly different character as she is repeatedly reprogrammed – but as the series moves on her own personality and awareness opens up more and more… leading to some intersting stories.

Between missions the dolls are ‘wiped’ giving them the personality of a small child and I think Eliza takes on the variety of personas rather well. She’s always herself but at the same time she’s many different people.

The whole thing is very different to any other show on tv at the moment, and that’s in no way a negative – it’s a lot of fun.

If you’re a fan of Whedon’s work then I can’t see how you would be anything but a fan of this as well. The episodes can be watched in any order as they all have stand-alone stories but I highly recommend watching them in sequence.