If I can tell you one thing about Bruno it’s this.

Don’t watch Bruno on an iPod Touch on the train on the way to work.

There’s too much to describe in Bruno, it’s a whirlwind of cringe inducing moments with a fair amount of male nudity. If you’ve seen Borat then you know what to expect… only you need to amp up the ‘shock’ moments.

Sasha Baron-Cohen is clearly going out of his way to cause controversy. He knew that people would be expecting more Borat, so pushed things closer to the line – exposing prejudices (anti gay issues) and extremism (parents willing to sacrifice their children – literally). 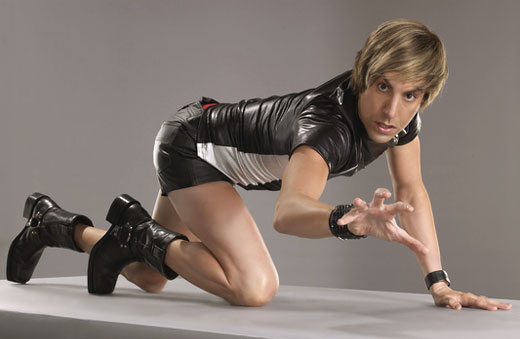 It also features Cohen in an array of bizarre outfits, the velcro suit being my fave. Thankfully none of them approach the slightly scary Mankini from Borat, with the possible exception of the bondage gear.

All that said, it is very funny, in a childish kind of way. Like Borat it is poking fun at the world in general and whilst a lot of it could be seen as offensive or racist it is actually surprisingly intelligent, and gently mocking. I certainly wasn’t offended by it but I’m quite thick-skinned with this sort of thing. I can’t decide if it’s something I would like to watch again but it did entertain me for the duration and is the sort of film you should watch – if only for the experience.