A couple of months ago, shortly after I was passed a book baton, I was walking home from work when I passed a book shop. I had finished the book I was reading that morning and needed something to read so in I went. As normal the Sci-Fi/ Fantasy section beckoned and what did I find? One of the books mentioned by the person who passed me the baton, A Game of Thrones (written by George RR Martin). I’m always open to trying new authors so I bought it and have been engrossed ever since. 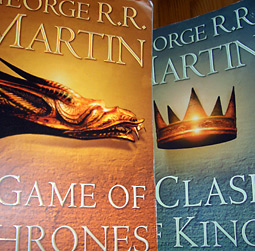 The book is classic epic fantasy with a huge cast of characters, murder, intrigue, massive battles and all the usual guff. But, unlike this blog, it is written so well that you can’t help but keep reading. After a slow(ish) start, where all of the lead characters are introduced, A Game of Thrones picks up pace swiftly. Each chapter is written from the point of view of a different character which is a nice approach and gives different perspectives on the events going on. Like all good epic fantasy the ‘hero(s)’ are regularly hurt with some of the leads meeting an early end which makes things very interesting.

Whilst the story is compelling I really hope this series doesn’t turn into another Wheel of Time deal. For those who don’t know the Wheel of Time series is a massive (at least 10 books so far) ‘epic’ fantasy story. It started off quite well, but now seems to be dragging it’s feet. There are so many characters spread around the world that the last book I read was 500+ pages of nobody doing anything. Each group of characters had two or three chapters to do everything before the next group was reintroduced. I’m convinced the series will never end. The fact that the earlier stories are being re-released in different formats just just shows the publisher seems to be milking the story for all it’s worth.

A Game of Thrones is actually the first book in a series (no idea how many there will be), and I’ve already read the second; A Clash of Kings (Song of Ice & Fire). I’ve ordered the third, which is so big it got split in two, and am waiting for it (them) to be delivered.

I want to find something comparable. I’ve read everything by Robin Hobb (and some of her earlier work under the name Megan Lyndholm) and loved it all, but looking around there is nothing else that compares. I’ve already mentioned Robert Jordan, and have read most of the Sword of Truth series by Terry Goodkind. David Eddings seems childish in comparison with his overly stereotyped male characters, and female characters who are all exactly the same. I’m currently reading my first Steven Erikson book, but so far there’s no competition – I guess Mr Martin has set the bar too high.

6 thoughts on “A Game of Thrones” Leave a comment ›

Legend of Zelda: The Lost Oracle