I’ve just read an interesting post on videogame aesthetics all about the quest for photorealism and it got me thinking.

Realism is boring, I find the quest for realistic gaming as pointless as photo realistic animated movies. The main problem is that we are surrounded by real things, we see them every day – so what’s the point of reproducing them? Since we’re so aware of the things around us when they are reproduced we notive every little thing that is out of place in a game or movie, we won’t necessarily know what is wrong, just that something isn’t right.

For example whilst the animation in Prince of Persia is stunning, the movement controlled by the player (turning around, moving close to the edge of a cliff/ ledge etc) can be very jerky. This is largely because of the need for a response. In games animations & movement have to be very quick in order to react to the actions made by the player. If the character doesn’t turn when he’s told to then it could be game over, and that’s not good.

Something else that is hard to recreate in games is interaction between characters and objects. In the real world if one object touches another it will either stop or break, in the game world it’s a given that some objects will pass through other objects, whether it’s a characters clothing or two people holding hands.

All these things reduce the realism and immersive qualities of games, and whilst they’re getting better all the time, there is still a long way to go before we reach true realism.

Taking a historical perspective though, could the peak of realism in any form of media also be a plateau that acts as precursor to wider experimentation? The push towards “realism” is visible in many forms. Film has climbed from silent, grainy, low resolution black and white to high definition imagery accompanied by surround sound. Sculpture and painting both emerged from rough neolithic beginnings to the eventual high fidelity representations of the Renaissance and following periods. Similarly, because in the beginning hardware limited representations to simplistic abstractions, the pixelated sprites of early game design are the equivalent of cave paintings.

In traditional art, such as painting, people spent many years trying to recreate the world on a canvas, and once that was achieved (the plateau was reached) they stopped, and began looking for other ways to express their creativity. This was the start of more abstract forms of art such as Expressionism, Surrealism, and Cubism. This has been mirrored quite nicely in video games. The closer we are getting to photo realism the more people are experimenting with new artistic styles, games such as Katmari Damacy and ICO being stunning recent examples. Both games are pushing in different stylistic examples with Katari Damacy going for the more abstract cartoony aesthetic and ICO using a hyper real styluised look.

One game in particular that I’m really looking forward to is Okami, styled after traditional Japanese brush and ink art it’s about as far from photo realistic as you can get, and the game looks like it will be fun as well, which is a nice bonus.

Being a lone developer I wouldn’t try to create a realistic game even if I wanted to but recently in a sudden burst of insanity I took on yet more work. I’m slow enough as it is without adding another game into the mix but being the glutton for punishement that I couldn’t say no. The game is a space based 2d collect em up (I guess you’ll have to wait and see) and all of the art is done in a very ‘old skool’ retro vector style, making it about as far from phot realistic as it’s possible to be. It will be fun working on a game where the art can be created in seconds rather than hours. 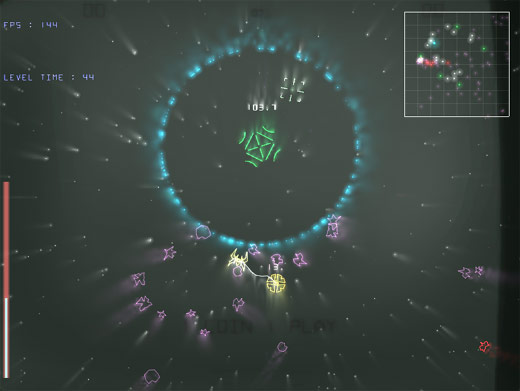 The game was being made by another developer and he decided to give it away so I volunteered to take it on. Hopefully I will be able to do it justice.