This weekend, I bought, played, and completed the new King Kong videogame. 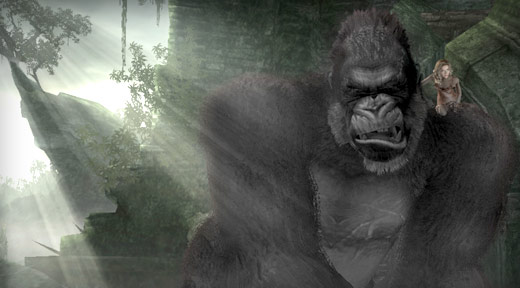 As with all Ubisoft games it’s visually stunning – I went for the GameCube version and it has to be one of the prettiest games on the console. The water and fire effects in particular are very cool.

In gameplay terms it doesn’t disappoint either. The game is primarily played through the eyes of Jack Driscol, with the occasional Kong based encounter. The gameplay mechanics are very simple, there is a small selection of weapons, and a limited amount of interactivity within the environment, but these have been combined in clever ways. Broken down the game is basically kill the dinosaurs and find the key to open the door, but it’s done in a way that rarely frustrates. Ammunition is hard to come by and you can only carry a single gun at a time, but there are always spears and bones nearby, both of which can be set on fire.

With the exception of the city based level, which I found a bit pointless, I found the Kong elements quite enjoyable. A lot of reviewers complained about the lack of control that you have over Kong, but I didn’t really notice, I was too busy thinking how cool everything looked, in particular Kongs animation, he moves wonderfully.

The non player characters, other people from the film, play a significant part as well. Their artificial intelligence is surprisingly good, they help out in fights, give you new weapons when you ask, and make the game far more immersive. The people with you are constantly changing. At times you are running around with the other characters individually, sometimes you’re with the whole team (there are 4 main npc’s), and occasionally you will find yourself totally alone. This and the ever changing settings make the game a lot more interesting than it could have been.

There are puzzles throughout the game but they aren’t incredibly challenging and you will generally solve them pretty quickly, as will you complete the game quickly. I must admit I like the idea that I can complete a game in a weekend – I think that’s the way games should be. I don’t play as many games as I used too and if I don’t finish a game the first weekend I play it, then it’s unlikely I will play it again. All the games I have finished in recent years, with the exception of Zelda, have been finished in two or three days. Thinking about it they’ve nearly all been made by Ubisoft as well (Splinter Cell, Prince of Persia – Sands of Time, Beyond Good and Evil, and um… ICO).

In fact the Prince of Persia Two Thrones game comes out next week, apparently it’s a return to form for the series (not that Warrior Within was bad, it just wasn’t as good as Sands of Time) and I’m really looking forward to it.

One thought on “King Kong – Woahh” Leave a comment ›