I’d been looking forward to Shadow of the Colossus for some time, and on the 17th of February 2006 it was finally released in the UK.

For the uneducated, Shadow of the Colossus is the follow up (but not a sequel to) the critically acclaimed ICO, which reviewed incredibly well, but failed miserably with the consumers. ICO went on to become a massive cult hit and has been re-released alongside Shadow, so hopefully people will pick up on it this time. 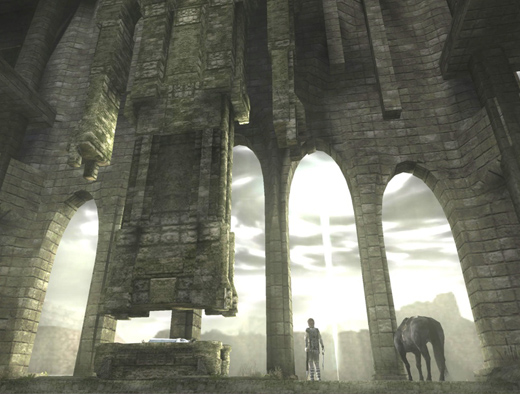 The key thing I really like about Fumito Ueda’s games, beyond the immense beauty, is the purity of vision. Both ICO and Shadow of the Colossus are incredibly simple games to play, with very simple objectives. However the mechanics of these games, and the creativity of the developers, have combined to make them some of the most entertaining games you are likely to play.

Unfortunately Shadow isn’t, in my opinion, perfect – hence the rather (um… incredibly?) delayed review – but I’ll get to that later.

The story is incredibly simple, you are a young man who wants to bring back the soul of his loved one. To do this you are tasked with killing 16 Colossi, massive beings that exist within the distant land you have travelled too.

However all is not as it seems. You start off eager to get to the first challenge, but the further you get into the game the more you question what is going on. The colossi don’t appear to be doing anything wrong, they exist within the land, and you are the intruder, so surely you should be the one being destroyed? It’s quite an interesting thing to do with the game, having some moral questions within games just doesn’t happen, and since the moral is never voiced out loud it’s up to you to make the connection.

Unfortunately this doesn’t help the game.

I’ve already mentioned what you have to do, but this doesn’t really explain how it plays. Shadow has possibly the best collision system ever. You can climb, literally, anywhere, as long as you have something to hold onto (grass/ fur/ ledges). When fighting the beasts you will have to climb all over their hairy bodies, with the level constantly shifting, throwing you around as you move.

To go with this is a grip meter. To hold onto something you need to press r1, but all the time you are hanging, you are using up ‘grip’, hang to long and you tire and fall. To go with the grip meter is a strength measurement. This only shows when you are about to perform an action (jump/ stab), when fighting colossi you need to store your energy before striking, in order to cause a decent amount of damage. This took me a while to work out (having not read the instructions) so I felt it worth mentioning.

The colossi are incredible challenges, some are massive and slow but incredibly strong, and others are small and very fast. All the colossi require a unique tactic of some sort to beat them, and sometimes (pretty much always) it isn’t easy to work out what the tactic should be. the 15th colossi, which is possibly my favourite (despite the problems), took an age to work out. I could see where to go but couldn’t work out how to get there (hint : get him to stand on the ledge). 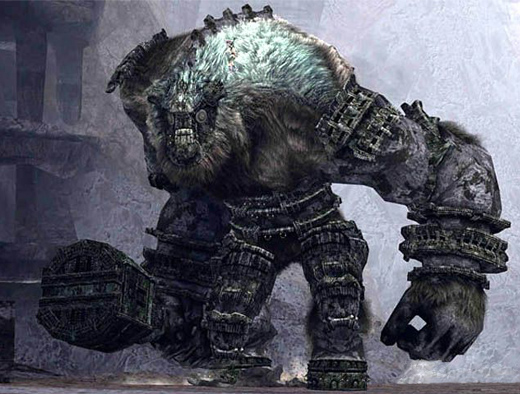 Another hint for beating the colossi. Pretty much every colossi is in a relatively plain environment, with a few objects dotted around – generally you need to use these objects to win. The first time you will see this is the second boss, which had me stumped for quite a while.

The climbing system is amazing. I often found it awkward jumping onto my horse (did I mention you have a horse to ride from place to place?) during a battle so tried to climb whilst making the leap into the saddle, and I ended up catching the horse and getting on. It’s not as graceful as normal, but it works fine. What I found amusing though was that one time, while in the temple, I tried the same thing and accidentally grabbed hold of a dove which ended up flying around with me hanging beneath (before collapsing about 5 seconds later).

There is a huge sense of the cinematic in Shadow as well. Unlike Metal Gear Solid where you get endless cut scenes, Shadow does almost everything in game as you play. Just adding little touches like falcons flying beside you as you gallop across the grassy planes, and the light filtering through the water as you swim along, enhance the game an incredible amount.

Then there are the other game extras – the UK version (don’t know about the rest of the world) has a few movies showcasing the development process of the game, as well as the ICO trailer (you really need to get that game if you haven’t played it already).

Shadow is a beautiful game, and plays very well. However the fights feel quite disjointed and because of the ‘moral’ there doesn’t seem to be so much incentive to continue. Sure you get to fight big beasties, but should you be? Ok, you’ll save the girl, but she’s dead and these massive creatures aren’t. Is it worth 16 lives for one? Especially since each time you kill a colossus you get taken back to the temple to wake with the souls of your defeated foes standing over you; watching.

The visuals are stunning. There are two things I find particularly impressive. Firstly, it’s on the PS2, yet features some of the nicest graphics I have seen in any game on any platform. Secondly, everything is seamless. There are no loading screens at all, it’s all streams in as you play, which is amazing on any console let alone the PlayStation 2.

Also the game is very hard – at least it’s hard to work out what to do. Once you know how to kill each colossus it’s relatively straight forward, but working out how to do the deed can take hours. There were even a couple of times when I had to fall back on the ever trusty gamefaqs.com – in fact you can find the guide I looked at here so no asking questions in the comments, this guide has far more information than you need in it.

I believe that games shouldn’t frustrate. I also drop games as soon as I get to bit that I die in. That sounds harsh but I have a lot of games and not a lot of time. If I get to a section that I can’t complete after 5 or 6 goes then I will stop. I attempted the final boss in Shadow of the Colossus twice. May not sound like I was being fair but he isn’t all that tough, the problem is the skill required to kill him – stop moving and your health replenishes so that’s not a problem. The problem is that he’s very hard to climb, and I kept falling off. I just got fed up with climbing all the way to the top, trying to kill him, and in 2 seconds falling all the way back down and so having to start from scratch. I must have tried the beating him at least 20 times and have not had the desire to go back and beat him properly. So Shadow remains uncompleted (the reason this review is so late) – I hope to get back to it one day.

Basically the game is good, very good even, but in my opinion it’s not up to the standards set by ICO which, admittedly, set the bar incredibly high. This doesn’t stop me from looking forward to their next game but I can’t help but feel a little disappointed by the whole thing.

I started God of War recently – hopefully I’ll complete this one. Apparently it’s ridiculously hard, so let’s hope I don’t give up too soon.

49 thoughts on “Review : Shadow of the Colossus” Leave a comment ›