Arstechnica have put together the three rules of effective cutscenes as taught by God of War 2.

Obviously they go into more detail, but the points themselves are very valid.

My own opinion is basically that cutscenes are boring. It’s well known that a lot of video game artists would love to work in movies, and when cd’s were first used as a storage medium they decided to fill them up with movie clips showing off their talent. The problem was that, whilst technically impressive, the movies just weren’t enjoyable. One of the most important things I have learnt about animation (and I am far from an expert here) is to keep it short and sweet – keep the action flowing – and in video games this is doubly important.

People buy games for the gameplay – if they wanted to watch a film they would buy a dvd. 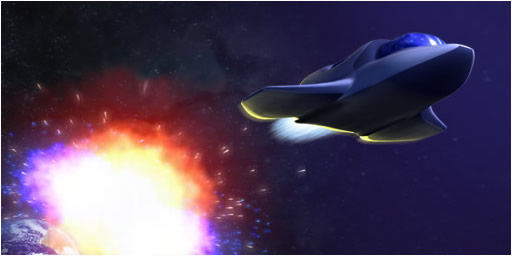 Cutscenes are something I have been thinking about lately as we are in the process of adding something similar to Gun Wing. However rather than going for the full blown cinematics we opted for a static image and some text. Creating the animations would have taken more work but was entirely possible however, in my opinion, a static screen works better. The static screen prevents interruption of the gameplay flow. Sure, it slows things down a little, but you only have to stop for 1 extra click. Slightly less important but a concern is the download size, not coming on a cd we need to cut corners where possible so that as many people as possible can download the game.

3 thoughts on “3 rules of effective cutscenes” Leave a comment ›

iPhone Game in More than a Day