Disneys latest animated adventure, Bolt, was recently released in the UK. It’s been a busy 6 months for me so I thought I’d take some time off and check it out. To be honest I wish I had more time to go to the cinema but it’s hard finding films that both Jo and I want to see, but Bolt seemed like some light hearted fun that we could both enjoy. 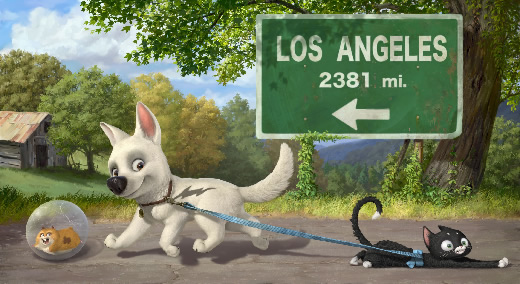 Bolt is a dog – a “super” talented one. He’s actually a dog who has been brainwashed into thinking he’s been genetically modified and so has super powers – lazer vision, super bark, super strength etc.

Bolts life is not dissimilar to Truman Burbanks from The Truman Show. He lives in a television recording studio that is carefully controlled so that he thinks it’s real. Special effects and camera teams work together to ensure his emotions are real. So, one day, when the tv format is changed and a cliff hanger is introduced – and he doesn’t manage to save Penny (his owner) – he tries to escape so that he can bring her back – only he ends up in a packing crate surrounded by Styrofoam… and gets transported to the other side of the country.

And so begins a Homeward Bound style road trip with Bolt trying to save his “person” from the green eyed man (the tv villain who ‘kidnapped’ Penny).

Along the way he meets a troubled cat, and a tv obsessed, hero worshipping hamster called Rhino. 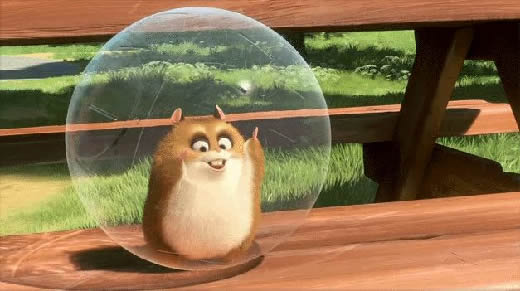 Apart from the basic setup the story borrows from lots of different films. There are hints of Inspector Gadget in the intro (Bolts owner is called Penny and she has to rescue her father) and the second two thirds are similar in theme to many films (Toy Story, Homeward Bound etc) – however I don’t think this is bad in itself. Bolt is a great film and the best Disney has made in some time – but compared to the output of sister company Pixar, it doesn’t have quite the same charm… but then what films do?

I did really enjoy Bolt, in particular the super frenetic first ten minutes. If anyone ever makes a tv series that would be like the fictional Bolt series, I’d watch it for sure! As it is the film was a very enjoyable way to spend a Sunday morning.

So, has anyone else seen it? Let me know your thoughts in the comments.