I always think of Michael Mann as making understated action movies. There’s action and there’s violence, but it never gets in the way of the story.

Public Enemies is his latest offering with Johnny Depp playing the famous mobster John Dillinger. This role is quite unlike Depps normal quirky/ arty/ exaggerated characters. Like the action his performance is understated and realistic – and the change of character works really well for him. 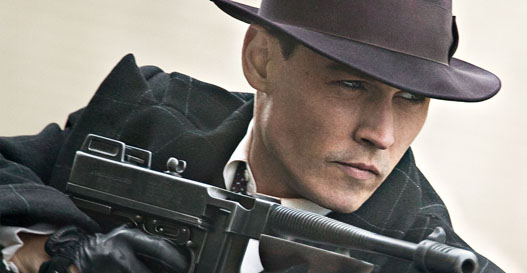 Christian Bale on the other hand plays the same character he always plays – a silent brooding person – who uses ‘modern’ methods (modern being relative of course – it’s set in the 1930’s) to solve crime. His character’s name is Melvin Purvis and he is the FBI agent in charge of the John Dillinger case.

To be honest the story didn’t grab me as much as Michael Manns Collateral which was considerably more tense – however it did keep me entertained for the duration.

I am quite enjoying watching these historically based films – Frost/ Nixon being another recent one. Too often I watch a film and think I should dig into the back story, but I forget, because I am now writing the reviews I actually do some digging – and that’s making them even more enjoyable.

Generally the first stop is IMDB with its inexhaustible movie trivia and goofs. Between the two of them you can find out everything interesting about the film. Then I head on over to Google and Wikipedia to read up on the characters and events surrounding the film.

We’re here for the bank’s money, not yours.

To the public Dillinger had a very clean-cut image, always polite and caring to all, which meant he was popular with the public who would often help him hide when needed. Also he was not scared of the authorities and would often go to clubs and cinemas in public and not worry about a response from the police. This is covered well in the film, with John Dillinger often saying that he is “too clever for the police force”, acting over-confident – which eventually proved his downfall.

I always think it’s strange that history is rewritten for movies. Public Enemies is loosely based on real events, but a lot has been changed. Most notably the deaths of John Dillinger’s friends were out of sequence, with some of them dieing before he did – despite the fact that they outlived him in life. From what I have read Johns life was as interesting as it looks in the film so I don’t understand why everything needed to be altered for the movie.

Image of a gun